Here’s What I Learned After My First NPC Figure Competition

If you follow me on social media, I’m sure you’ve seen weeks of posts about my competition prep. Back in December of 2015, I randomly decided that I wanted to challenge myself physically and train like the beautiful bikini models that I often saw floating up and down my Instagram timeline.

I began my training on the second week of January and competed at the NPC Rope Elite (Atlantic USA) Show on March 19th. Unfortunately, I was the only competitor in my class. The cool thing was I won by default (lol), but not-so-cool thing is, I didn’t actually get to “compete.” However, I did get to stand side by side with all of the class winners in both Novice and Open and I gained a variety of “success” habits along the way during my training.

The majority of responses I received through this process were very encouraging and positive. However, I did encounter some negativity on SM because alot of people didn’t understand what I was doing. I endured mean comments and people expressing their discontent with my weight loss. At first, I wasn’t sure how to respond, then I realized that they are entitled to their opinions but I can’t let other people dictate what’s best for me. The truth is, this process has helped me grow tremendously in terms of self-discipline and committing to a goal. I know the experience will help me grow in other areas of my life.

Following the show, I said I wouldn’t compete again, but honestly, I am becoming more and more interested in seeing how I’d place among other competitors in a division that better fits my body type: Bikini. I also don’t feel that I really mastered my meal plan during contest prep and am interested to see what the result would be taking a different approach. I’ll take the Spring and Summer to relax, eat “normal” again and re access my goals as I go into the Fall.

I started my training at 110 pounds, I was 103 pounds when I hit the stage. My weight has fluctuated since the show by I usually fall between 108-110 pounds now. My body composition is much different now that I have more muscle, so me at 110 in January looks different than me at 110 now. 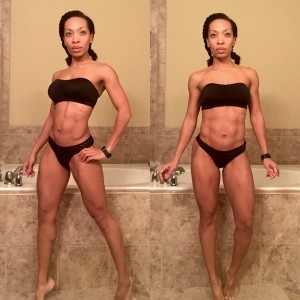 Here’s a few shots of me on stage, You can view the full gallery on my Facebook page: www.Facebook.com/MariaMoreMedia 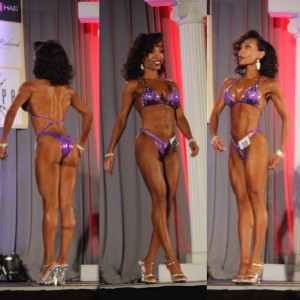 Our nude cheetah sets sold out in 24 hours! Limite

What makes you smile? Lately for me, it’s been l

New @mpoweredbymaria fitness sets on the way! What